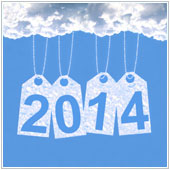 Google, one of the world’s largest and most well known companies,

offers numerous services and apps that are used by businesses and individuals the world over. 2013 proved to be a solid year for the giant tech company, with many different features and products introduced to make their offerings even better. Now that the year is over, let’s take a look at the year ahead.

Here are five things we think businesses can expect from Google this year.

The newest version of Android – 4.4 – was released in November and was more of an incremental update to the Jelly Bean platform than a whole new version of Android. While there were some useful features, including enhanced voice search and enhanced design, it is still very much the same as previous versions.

In 2014, it is highly expected that Google will release the next big version of Android – 5.0. What this update will bring is anyone’s guess, but it will likely be an overhaul that builds on the last few updates. It is highly likely that performance, interoperability with other devices, ease of use, and better contextual information will be key features or ideas that drive the new version.

What this means for businesses using Android is likely a system that can support more of your existing systems and will present you with the information you need when you need it, even if you didn’t ask for it!

The Nexus line – Google’s open device that is their idea of the best Android device – has seen yearly refreshes, with a new Nexus 7 and phone (Nexus 5) introduced. Both of these devices have proven to be popular and have seen solid sales.

In 2014, it is highly likely that we will see a new version of the Nexus 10, which wasn’t refreshed last year. This will be Google’s high-end tablet that is a direct competitor to the iPad. There is also a likely chance that new versions of the 7 and 5 will also be introduced. Google will probably also introduce Android devices like a smart watch under the Nexus line.

What this means for businesses is that there will be more quality devices to choose from that are affordable. If you are looking for a new tablet or device, it may be worth looking into last year’s offerings. It is likely that Google will introduce a new Nexus device before the summer, so if you don’t need one, hold off until then.

It is evident that Google has thrown their weight and support behind their social media platform Google+. 2013 saw continued Google+ integration into other areas, including YouTube, business platforms and even Search.

2014 will likely see a continued push, with Google further expanding Google+ integration into other apps like Drive. The company has noted that they want your Google+ profile to be the backbone to all Google services, and even the key to all other apps. What this means is that the number of users will continue to grow.

For your business this means that you should have a presence on this platform – if you don’t have one already – and should be working to post content on a regular basis. While Google has noted that companies with active Google+ profiles aren’t treated differently in Search results, it is highly likely that interactions and content itself will factor into results. So, if you create content your profile may start to feature higher in results too, which can only be positive for your company.

Google is constantly tweaking and upgrading their Search algorithm to make sure that it presents the most useful information to the user. 2014 will likely see Search become even smarter and more integrated, showing relevant information on your calendar, Drive files and even more email related features right in Search results.

One potential feature that could pop up is a forward thinking Search engine that can provide information on what you need to know next. For example, if you are writing a blog post on social media, you could see results on articles or books about the topic when you search for it.

As for SEO and other related Search, you can bet that Google will continue to tighten rules on accepted practices. What this means for your company is that you should be paying attention to announcements from Google regarding Search and auditing your content to ensure that it meets the requirements and that your website isn’t being punished, Search results wise.

Finally, it is likely that Google’s own Internet service – Google Fiber – will be expanded to more cities. Currently available for two cities in the US, and announced for one more, there is a good chance more cities will be announced in early 2014.

While an international release is likely more than a few years away, it will eventually be coming and could eventually prove to be a potential choice for blazing fast Internet connections.

What do you think will be Google’s defining moment in 2014? Let us know.