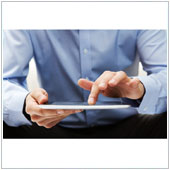 The last few weeks have been rife with tech speculation. No, we aren’t talking about the results of any election, rather new tablets. It seems that the last two weeks of October have turned into ‘Open Tablet Season’, where developers go hunting for sales by releasing new tablets. Announcements have been made by both Apple and Google. Apple had their turn last week, and Google’s big event is October 29. Rumor has it, there will be new Android tablets too.

Before you get caught up in ‘Tablet Frenzy 2012’ you should ask yourself how you intend to use it for business.

Before we answer any questions about whether a tablet, more specifically an Android tablet, is right for your business, we need to look at the elephant in the room, the iPad. The iPad is a great device that allows users to communicate much as they would on a smartphone, just over a larger screen. The thing about the iPad, and most other tablets, is that they are generally designed for the largest audience – no, not businesses; retail consumers.

This puts businesses at a bit of a disadvantage in terms of tablet adoption, simply because modern tablets are so new that they haven’t had time to evolve and concentrate on many other mediums outside retail everyday-use. This has left businesses wondering why they should adopt tablets, and those that have try to fit the tablet to traditional uses.

Most early business adopters of the tablets, Android tablets in particular, have been using them as oversized PDAs. In this way, Android tablets excel, especially if you use Google’s products. Practically your whole office, calendar, alarms, contacts and email are in one easy to carry device. The administration side of business and Android go hand-in-hand.

The tablet is great for the road-warrior. Why carry a large, bulky laptop around for presentations when most tablets can now connect to projectors, thus enabling users to run presentations and keep notes on the same small device. Tablets are also good for giving presentations during a lunch meeting, or to a smaller group. There’s no need to rent a big space with a projector to present to a handful people.

Where the tablet starts to look less impressive for businesses is in terms of productivity. Continuing the presentation example from above: Yes, you can easily give presentations on a tablet, however creating and editing, while not impossible, takes a lot longer than on a computer. The same goes for word documents and spreadsheets. It’s an act of frustration to use advanced features of both office functions on a tablet. While this sounds like a big con, there are a number of programs expected in the near future, like Office 2013 for Android, and add-ons like keyboards, that will make it easier to be productive on a tablet.

The other hinderance of tablet adoption is that many small businesses just don’t have a way or plan on how to manage tablets in the office. A large number of backup and management solutions companies use come from before the modern tablet became so successful, and as such, they lack a way to support these devices. Consequently the value add-on of tablets might be offset by the cost of upgrading to support them.

There is a high enough adoption rate of these devices amongst companies that back-end developers and service providers are starting to work in ways to manage/integrate mobile devices into the company’s systems while keeping the cost to a minimum.

If you’re thinking of integrating an Android tablet into your office ecosystem – a move many agree with – and if you want to be more mobile and connected from anywhere, we recommend that you talk to us first, as we may have a low-cost, or affordable way for you to integrate a device into your systems successfully.