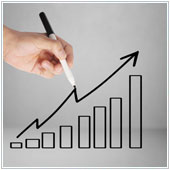 Technology is an important part of any business and has come to be relied on for many tasks performed in a multitude of roles. As you likely know, tech advances at a furious pace, so fast in fact, that it’s often a challenge to keep track of all the innovations and trends. In an effort to help monitor progress a bit easier, take a few minutes to look ahead at the year to come, in terms of what tech developments are on the horizon.

Here are five tech trends small to medium business owners and managers should keep their eyes on for 2014.

Wearable devices like the smartwatch will become one of the hottest gadgets in 2014. While this concept really began in 2013, with devices like the Google Glass and the Samsung Galaxy Gear, you can bet that most device manufacturers are developing some form of wearable tech for this year.

The biggest evidence that supports this claim is the inclusion of newer, faster BlueTooth standards in both iOS and Android updates. These updates allow devices like phones and tablets to connect to existing wearable devices like fitness bands and wireless headphones.

What this means for businesses is a potential increase in the number of devices connecting to networks, such as from employees bringing devices into the office. Companies will need to look back at their mobile device policies to ensure that their systems remain safe. Concerns aside, these devices could pose a new way to interact with customers or even to create different, engaging content.

It really remains to be seen as to how businesses will benefit from this type of tech, but there is a good chance that many companies will find a productive use for it.

Changing views on the cloud

Many experts like to think of cloud systems as a new concept, but it’s really reaching the end of this part of its life cycle. By now, most businesses are using at least one cloud-based system and have at least a basic grasp of what it is.

Because of its prevalence and increased use, it’s difficult to actually completely avoid the cloud. Many have started to realize this fact and we think 2014 will see an increasing number of business owners begin to change their views on the cloud. They will start educating themselves and looking for systems that really meet their needs instead of simply picking one that everyone else uses.

This change of view, and increased education will likely lead to an increased adoption of cloud systems. This will be due to strategic decision-making rather than because business owners feel they simply need to be in on the cloud. This also likely means that many cloud providers will become even more transparent and likely more willing to help customers by creating systems that are truly useful to small businesses.

It is pretty apparent that mobile devices are the next big thing, and in 2014 mobile marketing will become one of the most popular forms of marketing. From developing mobile specific content to advertising only on mobile platforms through apps like Facebook, we should see a rise in the number of mobile ad campaigns.

Overall, this should lead to more ads being shorter, visually forward; essentially easily digested by mobile viewers. Beyond that, businesses of all sizes will start to pay attention to mobile related data, distinguishing mobile users from desktop users, and looking for ways to cater to both crowds through different campaigns.

Increased use of two-factor authentication

Security is always an issue that many business owners are worried about, as well it should be because there is a good chance that security concerns will increase in 2014 – especially if mobile wearable devices really take off.

In order to make it more difficult for accounts to be hacked, many of the larger companies like Google, have introduced two-factor authentication which requires users to enter a password and another form of information, usually a PIN number sent to a mobile device.

In 2014, it is highly likely that we will see an increase in the number of services that offer this form of authentication. What this means for many businesses is increased security, which should be welcomed.

IT becomes more of a core business function

Many business owners will begin to question their existing technology and whether it really is giving them the best value possible and if they are using it effectively. Because of the largely complex nature of many systems, small business owners that take an interest in their IT will likely find that they struggle with managing and optimizing it. They will instead turn to an IT management partner who can help them find customized solutions.

While this isn’t a new trend by any means, technology is becoming increasingly advanced and many companies are struggling. If you are looking to make IT more of a core business function, or would like to gain control of rampant systems please contact us today to see how we can help.