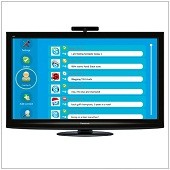 Technology continues to evolve each day

Was developed by David Dinka and his teams a result of a series of worldwide interviews asking respondents about their communication needs. Common desires was discovered:  to be able to communicate with colleagues, family, and friends from somewhere comfortable, and to make video calls on a big screen.

The internet especially has made life easier and more convenient. You can shop online, conduct research from any location, bank online, and even have meetings and conferences online. There’s no need to fly from one state or country to another for board meetings, and no need to pay for expensive telephone bills for conference calls. Downloadable internet programs allow you to meet as long as you want, and if both parties have downloaded the same program – it’s free. One such program is Skype.

Skype is a software application that enables registered users to make voice calls and group chats over the internet, as well as use offline messaging, instant messaging, and chat history storage. Calls between Skype users are free, and calls to landline and mobile phones can be made for a fee using a debit-based user account system.

The Skype-enabled TV was developed by David Dinka and his team as a result of interviews conducted worldwide asking respondents about their communication needs. The interviews uncovered a common desire to be able to speak to their colleagues, family, and friends from a more comfortable place than their desks, and they prefer to make video calls on a big screen.

Together with its partners Panasonic and Samsung, Skype has developed the first generation of Skype-enabled TVs that allow you to call and receive video calls from anyone who has Skype. You can also video call users with Skype for Windows or Mac (version 5.0 and above) on their computers or laptops.

How does it work? You’ll need a Skype-enabled TV (Sony and VIZIO will also offer models later this year) and a webcam developed specifically to work with your TV and Skype. These special webcams have built-in microphones that allow you to make calls from a distance without having to shout or move closer to the TV. Some Panasonic TVs will even allow you to make HD video calls. To maximize your video calls, it’s recommended that you have a 1Mbs symmetric broadband connection.

For entrepreneurs with several offices around the country or even around the world, this will be especially useful, allowing them to link offices and have a full-time video connection for free.

And with Skype TV, you won’t have to stay glued to your desk staring into the small screen of your computer during conference calls. You can be seated comfortably on your sofa with a clear view of everyone involved. And because the service is free, you won’t have to worry about rushing through meetings to keep operation costs down. You get your work done at the pace that you set.