LG Networks, Inc. > All you need to know about Migrating and Upgrading.

All you need to know about Migrating and Upgrading.

All you need to know about Migrating and Upgrading.

Today in this article LG Networks’ Windows Server 2016 Support team will be taking a closer look at the technical differences between the two most commonly used terms: Windows Server Migration and Windows Server Upgrading.

The purpose of this article is to educate the reader on the terms: Migration and Upgrading, since both of these words are quite commonly used and often their meaning is interchanged, but technically they are two very different practices. The focus here will be on the prime benefits of Migrating or Upgrading to a newer version of Windows Server 2016 and which method is suitable for which type of user.

Migration can be simplified as the process of replicating applications which were installed in a previous version to the newer version with all of their configurations, settings and functionality intact. Example: Supposing that you’re using a custom designed application in Windows Server 2012 which you would like to have ported as a whole or parts of it into Windows Server 2016 with its functionality, configurations and settings intact. That processes will be termed as Migration.

However in some cases you may want to check the newer features available with the next edition which may not have been there previously. Often it happens that newer releases are based on customer feedback and they come with inbuilt features which are designed to cover functionality which in their earlier versions had to be installed otherwise.

Upgrading is a process that can be simplified as replacing your Operating system’s core with a newer, more advanced version. Microsoft Windows Server 2016 supports Upgrade from both Windows Server 2012 and Windows Server 2012 R2. Upgrading can be done keeping all the server roles, settings and the data intact.
However upgrade option is mostly preferred over a “clean installation” when system downtime along with user and hardware dependency plays a major role in the network. Otherwise most IT consultants would suggest going for a clean Windows installation. 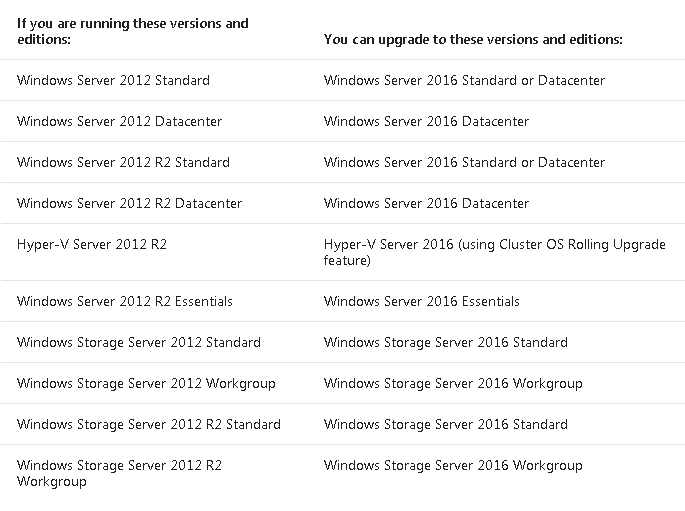 The Windows Server 2016 comes with an advanced feature of Cluster OS Rolling Upgrade. This enables the system Administrator to upgrade the operating system that’s on the cluster nodes from the earlier Windows Server 2012 R2 to Windows Server 2016 without having to stop the Hyper-V Virtualization and Scale-Out file server workloads. This feature offers ZERO downtime and works as a great alternative to classical OS upgrades.

What is License Conversion?

Windows Operating System also offers License conversion features which allow it’s users to convert their Windows edition into another edition of the same release with a single step (command) and a License key. This process is known as License conversion. Example:  Microsoft allows its users that are running Windows Server 2016 Standard Edition to convert it into Windows Server 2016 Datacenter Edition with a single command and a License key.

For more information on how Licensing works please contact our customer support.

Thinking about Upgrading or Migrating to Windows Server 2016?

LG Networks is a Microsoft Gold Certified Partner with years of experience in providing quality benchmark services. We will be more than happy to help you choose the right path for upgrading your network infrastructure. Our experience in Networking and Networking applications allows us to fine tune any Network infrastructure thus giving you the best efficiency and maximum data throughput for your equipment. Our Tech team is available 24/7 to assist you with any network related issues.