Use your Android tablet to take notes

Taking Notes on an Android Tablet 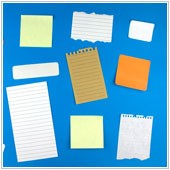 Note to self: Check the status of order number 3261 after lunch.’ Do you find yourself making mental notes like these on a regular basis? How many of them do you actually remember? Most people find that if they don’t write it down, they will most likely forget. But who carries a pen and paper around with them these days? If you have an Android tablet, there are some really handy note apps available, why not use that?

For users who are integrated with Google; using Google Drive, Gmail, etc., Keep is a recently released note app that allows you to create notes and lists. You can also attach voice reminders, pictures and change the color of each note.

What separates this app from others is that it syncs your notes automatically with Google Drive, which means you can access, edit and manage the notes from any system. The mobile app looks great, as it follows Google’s new ‘clean’ look with lots of white space. Notes are added to the main screen as thumbnails with the main content featured in the image. If you use Google’s apps, this is a great addition that you will likely find useful. Free on Google Play.

If your office uses Microsoft Office, or Office 365, you may have already used OneNote. The mobile version lets you create notes and lists with bullet points, checkboxes, text, and pictures. You can sync these notes with your SkyDrive account, or your Office 365 ID – they should both be the same ID – and have access to them on nearly every device including your desktop.

If you use OneNote on your desktop or browser, you will be able to view and open these notes using the mobile app and vice versa. Free for 500 notes on Google Play. If you want to create more than 500 notes, there is an in-app upgrade cost that varies depending on your account.

If you use multiple mobile and desktop platforms, or aren’t picky about an app’s integration with existing systems, Evernote should be right up your alley.

Like Google Keep, this app lets you create notes and lists, and also add voice reminders and pictures. The ability to search your notes for keywords is also included, which makes this app useful if you take a large quantity of notes.

The key distinguishing feature of this app is that it isn’t just for one system. You can install versions on nearly every platform e.g., iOS, Windows Phone, BlackBerry, Windows, Mac, Linux, Chrome, Firefox, etc. And your notes will be synced as long as you have an Internet connection. This makes it perfect for the business owner who has a Windows PC in the office, an iPhone and an Android tablet. Free on Google Play.

These are just three potential note apps that you can use on your Android tablet. Do you use other ones? Let us know.